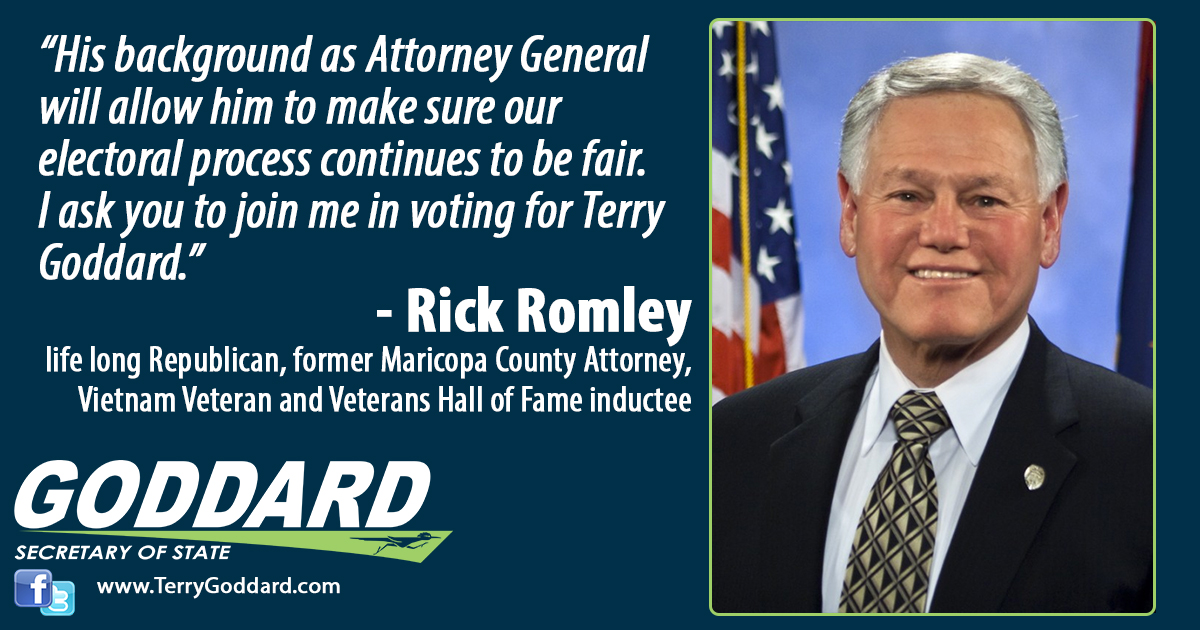 ​19 stops in 7 counties over 4 days -- one heck of a way to spread the word -- Terry Goddard has a comprehensive plan to STOP DARK MONEY and will treat all voters fairly, regardless of party. Check out the itinerary and join Terry for a stop or two.

​With just days to go until the election, we need your help to remind voters to cast their ballots and find their polling places. Can you give an hour or two to help us make calls? It’s a quick, easy call just to remind them to vote.

The Goddard office will be open for volunteers from 9am-8pm, until polls close on Election Day. Click here to sign up to volunteer and help us get out the vote! Can’t make it to the Goddard Headquarters? Find a GOTV location near you!

Every Call Counts, Will You Make One?

With just days to go until the election, we need your help to remind voters to cast their ballots and find their polling places. Can you give an hour or two to help us make calls? It’s a quick, easy call just to remind them to vote.

The Goddard office will be open for volunteers from 9am-8pm, until polls close on Election Day. Click here to sign up to volunteer and help us get out the vote! Can’t make it to the Goddard Headquarters? Find a GOTV location from the list below:

60 Plus Anything But a “Non-Partisan Seniors Advocacy Group”

PHOENIX – In an op-ed for the Tucson Weekly, Terry Goodard highlights how Dark Money organizations like the 60 Plus Association are structured to deceive voters.

60 Plus describes itself as a “non-partisan seniors advocacy group,” but as Goddard points out, that couldn’t be farther from the truth.

“The 60 Plus Association, in fact, is a Koch Brothers-backed front group that floods our airwaves with political ads paid for with anonymous corporate cash designed to distort our elections and deceive voters,” Goddard writes.

The only priority 60 Plus has when it comes to seniors, Goddard writes, is “to advocate for the privatization of Social Security.”

Further, 60 Plus – along with scam artists who prey on seniors through fake charities – has benefited from the removal of the requirement that charities register with the Secretary of State’s office. That requirement forced transparency on both charitable organizations and the Dark Money groups structured as charities.

“Only in the twisted world of Dark Money does it makes sense that a ‘non-partisan seniors advocacy group’ would want to privatize Social Security and make it easier for fraud to be committed against seniors,” Goddard writes. “Dark money is a fraud on Arizona voters and we must work together to stop it.” 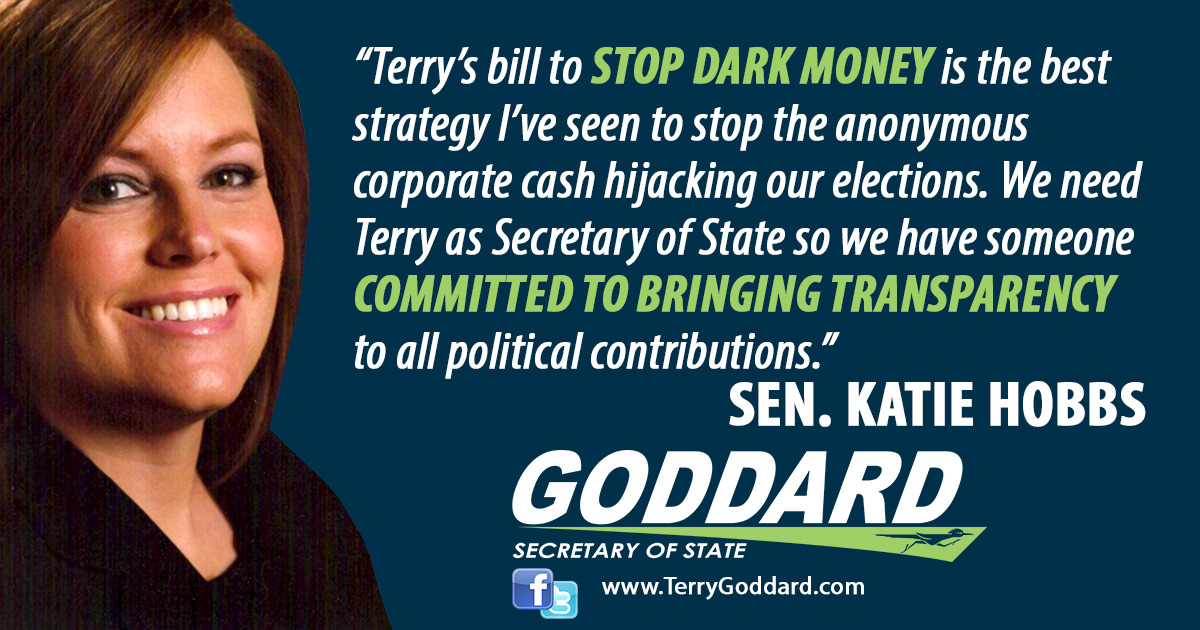 Former and future State Rep. Ken Clark discusses his concerns with my opponent. Ken joined me earlier this week with over a dozen legislators to discuss my plan to #StopDarkMoney and I appreciate his support.

Where in the world is Terry Goddard?

Get Out The Vote Tour!

Terry Goddard will be touring the state talking about his plan to Stop Dark Money and treat all voters fairly as Arizona Secretary of State. Come by any of the stops along the way, meet Terry, make a few phone calls to voters, or meet up with other volunteers to canvass your neighborhood. It's go time -- let's GO GODDARD!

Thanks to Goddard’s hard stance against Dark Money, Roberts writes, “those who stand in the shadows – whoever they are – want to make sure that Goddard isn't the guy in charge of overseeing Arizona's elections.”

Roberts’ column comes one day after state Sen. Michele Reagan announced that she is now setting a series of conditions on her willingness to denounce Dark Money. Reagan’s softening of her stance against Dark Money was proceeded by a $300,000 Dark Money ad buy on her behalf courtesy of Sean Noble, the Arizona-based henchman of the Koch Brothers.

“Stopping Dark Money is not a partisan issue, Republicans and Democrats alike are crying for reform. But, most important, voters throughout our state are demanding to know who is behind all those despicable ads,” said Goddard. “Who is really paying for the slams and the attacks that crowd the airwaves and our mailboxes? Voters are demanding transparency about who is behind all political expenditures. They have a right to that transparency.”

Goddard plan will kick Dark Money out of Arizona

PHOENIX – Terry Goddard today announced the support of a coalition of Arizona legislators who will work to turn Goddard’s plan to stop Dark Money into law.

“Terry’s bill to stop Dark Money is the best strategy I’ve seen to stop the anonymous corporate cash hijacking our elections,” said Sen. Hobbs. “We need Terry as Secretary of State so we have someone committed bringing transparency to all political contributions.”

Goddard’s proposed legislation can be viewed here. It is based on his plan to stop Dark Money, which Goddard announced earlier in his campaign.

The focus of my campaign for Secretary of State has been stopping Dark Money. I am running to stop the anonymous corporate cash flooding into Arizona, one of the biggest threats to our democracy. But, if you attack dark money the way I have, it is not surprising when dark money strikes back.

I am absolutely committed to fighting back against the anonymous corporate cash flooding into Arizona – and I’m happy to take on these corrosive groups. They know that if I am elected Secretary of State, I am committed to ending the pollution in our state elections caused by 60 plus and the other Dark Money groups, many of them run by Sean Noble, the Prince of Dark Money in Arizona. Their irresponsible and false attacks that smear candidates and mislead voters must be ended.

These anonymous corporate interests are attacking me because their chosen candidate is in big trouble. State Senator Michele Reagan has said there is virtually nothing she can do about Dark Money as Secretary of State. I can and will. My comprehensive plan to stop Dark Money can be found at terrygoddard.com.