I celebrated National Voter Registration Day the best way possible -- by getting out and registering voters at Mesa Community College, South Mountain Community College and ASU Downtown! I commend the dozens of groups and hundreds of volunteers who helped register thousands of new voters statewide. ‪#‎CelebrateNVRD‬

Great Arizona author Jana Bommersbach posted her insights on my part in the fight to ban payday lenders from our state. Thanks, Jana.

"GODDARD RIGHT; REAGAN BACKED PAYDAY LOANS. Read the Republic's Sunday "Fact Check" column with great interest. I well know of Terry Goddard's tireless work to control this predatory industry--even if his Secretary of State opponent Michele Reagan couldn't see it. I wrote a column for Phoenix magazine on payday loans in May of 2007 entitled "Loan Rangers."

Pulled a few excerpts of what then Attorney General Terry Goddard had to say--and it's yet ANOTHER reason he should be our next Secretary of State:

...Terry Goddard calls the payday loan industry a “vicious business.” He notes we got them in the first place in the year 2000 because Arizona repealed its usury rules to lure credit card companies to the state. “That move created thousands of jobs, but it made Arizona consumers victims of these extraordinary interest rates,” he says.

If he had his way, he’d follow the lead of California and Georgia, which have banned payday loans completely.

Goddard says he won’t stop fighting to get payday loans under control. “I’m outraged,” he says. “It’s totally ridiculous that Arizona consumers have none of the protections other states have. I’m tired that we allow people to be put in a hole they can never crawl out of.”

Terry Goddard Announces Plan to Get Dark Money out of Arizona

PHOENIX, AZ – Terry Goddard today announced his plan for how to use the Secretary of State’s office to get Dark Money out of Arizona.

“Dark Money is a major threat to our democracy, and I can think of no bigger issue for our next Secretary of State,” said Goddard. “My plan will attack Dark Money from every angle – and is the culmination of months of research and consultation with some of the leading state and national election law experts.”

“Since the first day of this campaign, I’ve told voters that I’m running to take on Dark Money and get it out of our state,” Goddard added. “This plan shows how I’ll do it.”

Reagan runs from Pearce's words. What about his beliefs? | azcentral.com

State Sen. Reagan is attempting to distance herself from Russell Pearce now, but followed him loyally for years. Her voting record shows how close they really were. Had he not been kicked out of office, I'm sure Pearce would have joined her in supporting #SB1062, the Right to Discriminate Bill. 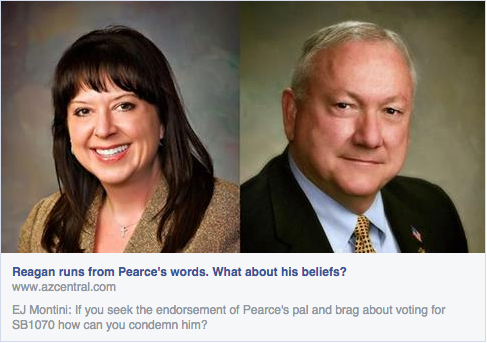 BOTTOM LINE: As attorney general, Goddard fought against payday loans and prosecuted lenders who continued providing them after they became illegal. Reagan voiced support for the loans at least twice before they expired. 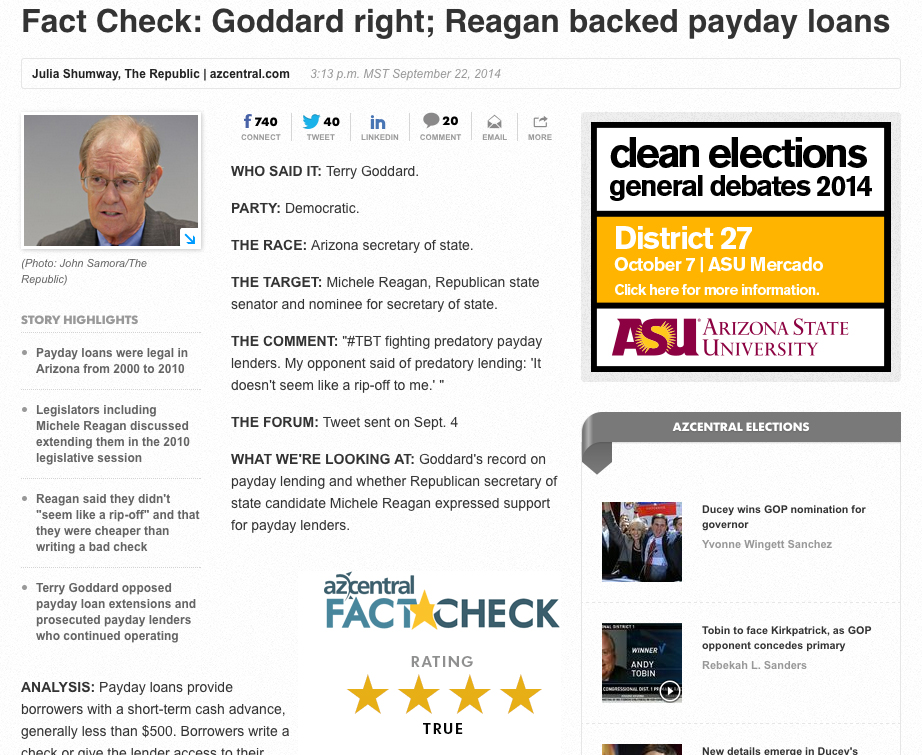 "To the Polls" has always been one of my favorite drawings. The artist, Betty Drake, was celebrating our upset victory in the Phoenix district system election. Years later, it is the perfect picture for this election. How could Betty know that I would again be urging voters to the polls in 2014 and needing that armor and perhaps a lance in the fight against dark money? I hope you will join me as we head to the polls November 4th. ( Don't miss the little creatures in the corner including a "poll" cat and a "poll" weevil.)

I hope you will take a moment to like and share this endorsement video from former Police Chief Jerry Oliver. I am proud to have the support of so many law enforcement professionals like Chief Oliver and will use my experience as Arizona's top law enforcement officer to stop the flow of anonymous, corporate "dark money" that is flooding our state, trying to buy our votes. #GoGoddard

Only citizens are allowed to vote. Period.

"If you're a citizen you have the right to vote. If you're not a citizen you can not vote." Terry Goddard couldn't be more clear on the issue but we've already started hearing from his opponent that he can't be trusted to follow the law. In her first speech as her party's nominee, Terry's opponent quipped, "Terry Goddard in charge of elections is like the fox guarding the hen-house."

She couldn't be more wrong.

There are plenty of differences between Terry and his opponent. New ones don't need to be manufactured at the expense of the truth.

But don't take our word for it. Terry and Sen. Reagan filmed their first joint appearance together last week and Terry is looking forward to future forums...

Fighting for the rights of all voters and treating everyone fairly regardless of party, starts with a fundamental understanding of the voting process.

Read the Arizona Rebublic 'Fact Check' on Michele Reagan's claim that independents in Arizona are not on the early voting list. http://snip.ly/1yAi

A special time for me growing up was any time with my grandfather. The two of us are strolling in downtown Tucson around 1955. He always wore a hat and a suit when out in public. I clearly am not as formal. Looks like Broadway near Steinfelds Department Store and going toward my favorite spot, Jack Ellis Sporting Goods. #TBT