What you need to know this week - August 22nd

Terry’s first television ad debuted last week and the response has been great! Arizonans are excited about a candidate who has the law enforcement experience to stop dark money. But 30 seconds isn’t much time to explore the important issues surrounding this race, so Terry has taped a series of interviews about issues like dark money and his commitment to take the politics out of the office and treat all voters exactly the same, regardless of party.

The first video we’d like to share is titled “Accountability” and it addresses the biggest threat facing Arizona elections: dark money. The problem of vast amounts of anonymous, corporate money flooding our elections is a critical one.  Terry wants all voters as to be aware of the dark money problem and how we can work to stop it. 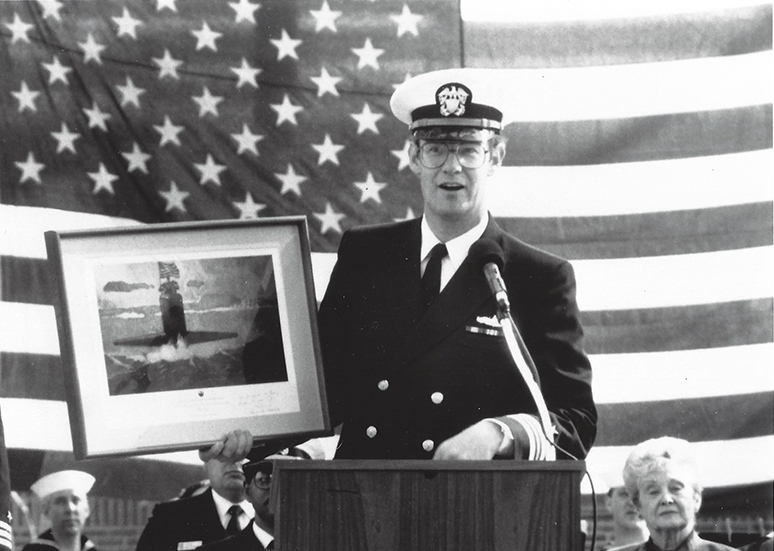 As Phoenix mayor and a Naval officer it was my privilege to celebrate the relationship between Phoenix and the proud heritage of combat vessels named Phoenix going back to the Revolutionary War.  In this photo, I am presenting to the Commanding Officer of the USS Phoenix (SBN-702) a Los Angeles class submarine, a painting of the Phoenix’ sail to hang in his wardroom.  There are currently efforts by the  Phoenix Saguaro Chapter, The Association of the US Navy to bring that Phoenix’ sail to Arizona to display proudly.  I have enthusiastically supported these efforts for years and hope this dream will finally come to pass. For more information go to Save Our Sail -- SOS Foundation on Facebook.

Millions of dollars in so-called “Dark Money” are contaminating Arizona elections and endangering our democracy.  These dark dollars are flooding into our state as anonymous cash, targeting political candidates and issues to influence and buy our votes.  The size and scope of this torrent of dollars threatens voter confidence and the foundations of our democracy.

Dark Money does its work in the shadows by amassing unlimited contributions from corporations and individuals who want to influence elections without leaving their fingerprints.  The system allows dark money agents to say and do just about anything while their cowardly contributors stay hidden from public scrutiny.  Unlike political candidates who must answer to voters, anonymous funders have no responsibility for their words or their deeds.  Because no one is accountable, the truth has become disposable.

I have started an online petition so we can stand up together against dark money.  Please join me in driving dark money from our state.

Ken Bennett has, as Arizona secretary of state, overseen countless candidate filings, advocated for proof of citizenship to register to vote, and preached the need to return early ballots.

But during his 5 ½ years in office, he has never waded into the immigration debate. Nor has his office had a say on gun rights.

The same goes for former Secretary of State Jan Brewer, now Arizona's governor, and her predecessors in the state's No. 2 political post.

But an outside spending group is interjecting those issues into this year's GOP primary, arguing that it's important to know where candidates stand on those topics, because the secretary of state is next in line to become governor if the office is vacated.

By raising these issues, the Free Enterprise Club has effectively highlighted what has become the central issue of the race: the role of anonymous funding, or so-called dark money, in campaigns.

Independents are the largest group of voters in Arizona, but their votes are being suppressed by a legislature, governor and secretary of state desperate to maintain the status quo. Please take a moment to read how and why this is happening and what I will do to make sure Independents enjoy the same rights and opportunities as Republicans and Democrats.

(Read the shorter version or read the 2,000 word version for the rest of the story)

For his “unwavering support for public safety issues” 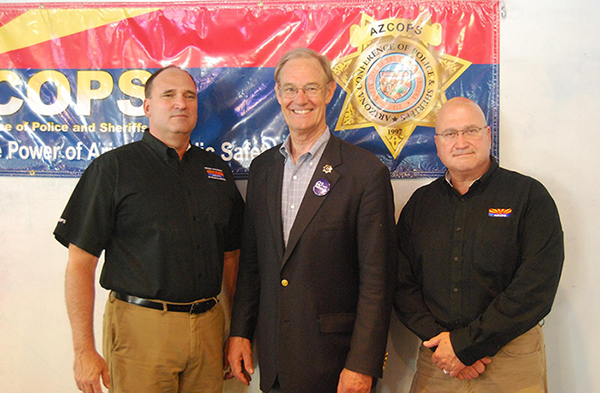 Terry Goddard received another major endorsement in his campaign for Arizona Secretary of State. AZCOPS, the Arizona Conference of Police and Sheriffs, in announcing their support stated, “Your unwavering support for public safety issues and public employees is deeply appreciated by our members throughout Arizona.”

“Having served as Arizona Attorney General, fighting against the cartel agents who were smuggling money, people and drugs across our southern border, I know it will take law enforcement experience to stop anonymous dark money that is trying to buy Arizona votes,” said Goddard. “That is why I am particularly proud to have the support and endorsement of the Arizona Conference of Police and Sheriffs for my campaign for Secretary of State. I value the contributions made by these men and women of law enforcement every day.” 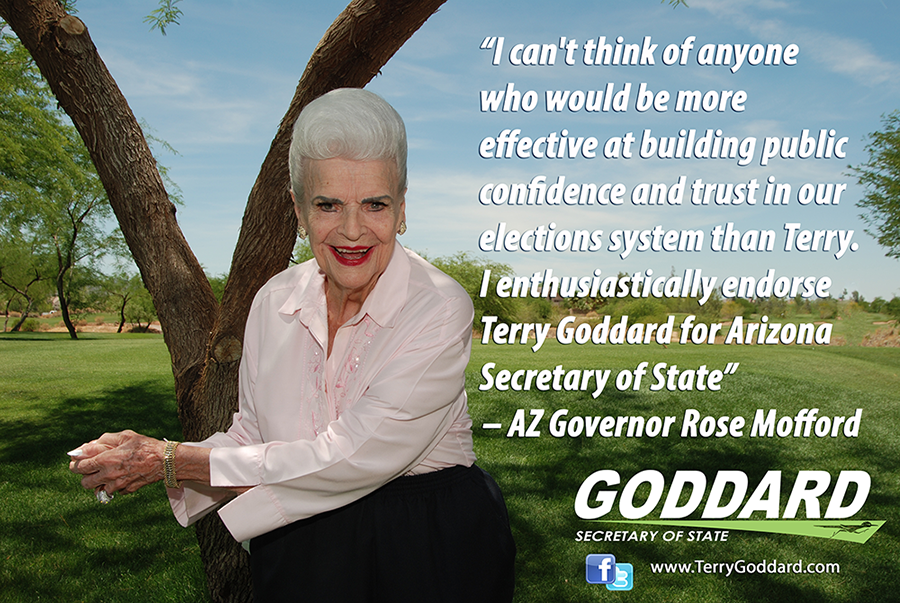 Street corners are getting crowded with campaign signs 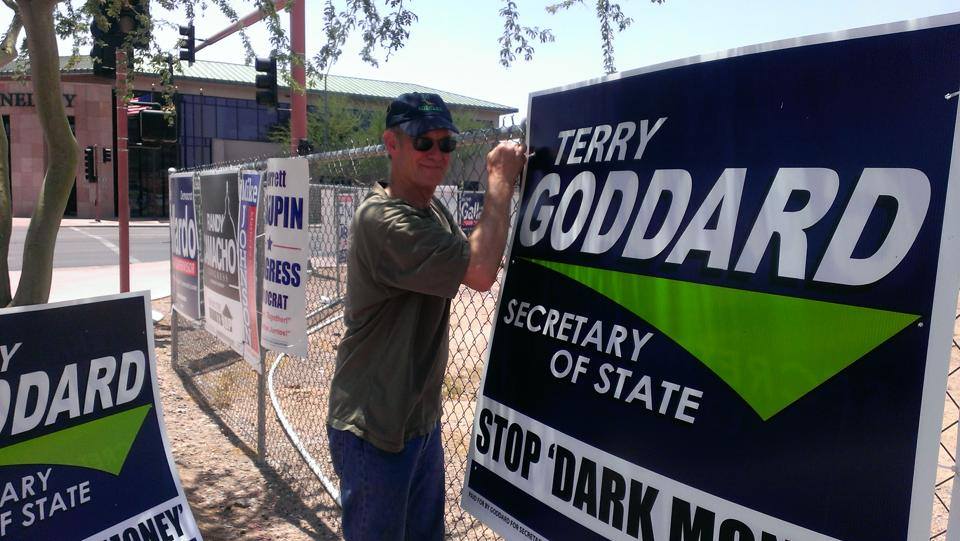 Street corners are getting crowded with campaign signs -- we'd like ours to stand out as much as our candidate does. If you have access to a good location for our 4x4s, please let us know. -Team Goddard

So-called dark money — contributions from groups that are not obliged by law to disclose their donors — is showing up in political campaigns and fueling the debate about transparency in politics.

The Republic asked the candidates: As secretary of state, what, if anything, would you do to address dark money?

Is your vote for sale?

One of the biggest threats facing voters in this election is the influence of 'dark money'. These donations where the actual donor remains hidden are already coming into the Republican Secretary of State race. I was recently asked by the Arizona Republic about what the Secretary of State can do to control 'dark money'. Bottom line: we must stop this deplorable practice. Arizona voters have the right to know who is trying to buy our votes. Below is my Republic answer.