Why do so many Arizonans hate politics? 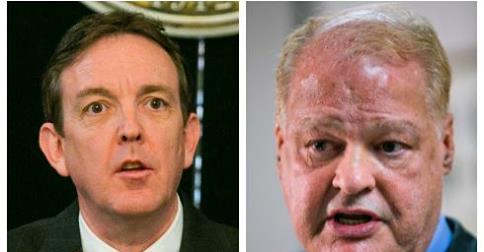 Why do so many Arizonans hate politics? Here is one big reason.

Ken Bennett asking the Clean Elections Commission for permission to use taxpayer dollars to pay for television ads starring, you guessed it, Ken Bennett. The 2012 election exposed many troublesome obstacles Arizona voters faced at the polls: long lines, ballot confusion and nagging concerns over whether or not their ballot would be counted at all. Secretary Bennett has had over two years to educate Arizonans so we won’t have the same problems this election year.  But, he didn't do it until running for Governor when appearing in “educational” ads might help him.

Taxpayer dollars should not be used to subsidize political ambition. These ads should run, but without Bennett.

Even members of Congress can't use taxpayer money to communicate with voters 90 days prior to an election.

No wonder Arizona voters are disgusted. When officeholders, like Ken Bennett and Tom Horne, keep trying to use their office and public money for their political benefit. When Attorney General Horne uses mortgage settlement money, which should be helping troubled homeowners, to promote himself on radio and television at election time. When Secretary Bennett, who was supposed to be running our elections in an impartial and nonpartisan manner, took on the highly partisan role as Chair of the Romney for President Campaign in Arizona. When public employees in the Attorney General’s office report they have been campaigning for their boss, Tom Horne, when they should have been working for us.

Arizona deserves better. I am running for Secretary of State to take the politics out of that office. I want to restore voter confidence that our voting system is fair, secure and efficient.

As Secretary of State I will not endorse partisan candidates, will not serve as an honorary chair on candidate committees, will not use taxpayer dollars to fund election year ads featuring me.

Arizona deserves elected officials who make headlines for the right reasons. We did it before, we can do it again. I call on Ken Bennett, to do the right thing and withdraw his request to appear in taxpayer funded ads.

Join me in restoring confidence in Arizona government.